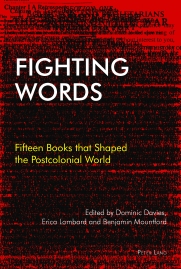 Fighting Words: Fifteen Books that Shaped the Postcolonial World, edited by Dominic Davies, Erica Lombard and Benjamin Mountford, will be launched on Friday 20 October 2017 at 12.30 pm in the Radcliffe Humanities Building at the University of Oxford.

The launch will include a discussion by an expert panel: Wale Adebanwi (Rhodes Professor of Race Relations; African Studies, Oxford);  Elleke Boehmer (Professor of World Literature in English, Oxford) and Asha Rogers (Lecturer in Contemporary Postcolonial Literature, University of Birmingham). Tessa Roynon (University of Oxford) will chair the event.

The event will also mark the formal launch of the book series Race and Resistance Across Borders in the Long Twentieth Century.

Can a book change the world? If books were integral to the creation of the imperial global order, what role have they played in resisting that order throughout the twentieth century? To what extent have theories and movements of anti-imperial and anticolonial resistance across the planet been shaped by books as they are read across the world?

Fighting Words responds to these questions by examining how the book as a cultural form has fuelled resistance to empire in the long twentieth century. Through fifteen case studies that bring together literary, historical and book historical perspectives, this collection explores the ways in which books have circulated anti-imperial ideas, as they themselves have circulated as objects and commodities within regional, national and transnational networks. What emerges is a complex portrait of the vital and multifaceted role played by the book in both the formation and the form of anticolonial resistance, and the development of the postcolonial world.

The book is available for purchase here.