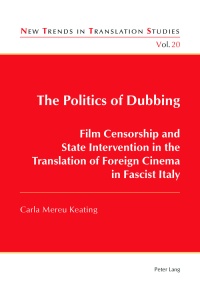 During the late 1920s and the 1930s, the Italian government sought various commercial and politically oriented solutions to cope with the advent of new sound technologies in cinema. The translation of foreign-language films became a recurrent topic of ongoing debates surrounding the use of the Italian language, the rebirth of the national film industry and cinema’s mass popularity.
Through the analysis of state records and the film trade press, The Politics of Dubbing explores the industrial, ideological and cultural factors that played a role in the government’s support for dubbing. The book outlines the evolution of film censorship regulation in Italy and its interplay with film translation practices, discusses the reactions of Mussolini’s administration to early Italian-language talkies produced abroad and documents the state’s role in initiating and encouraging Italians’ habit of watching dubbed films.

Carla Mereu Keating holds a PhD in Italian Studies from the University of Reading. She has contributed to various publications on film history, censorship, ethnicity, dubbing and subtitling. She is a visiting research fellow at the Centre for the Study of Cultural Memory at the Institute of Modern Languages Research, School of Advanced Studies, University of London. Her current research focuses on portrayals of warfare and war legacy in films, state censorship and the shaping of cultural and collective memory.

1 thought on “The Politics of Dubbing published”